Tahiti Village is going to the birds this Saturday 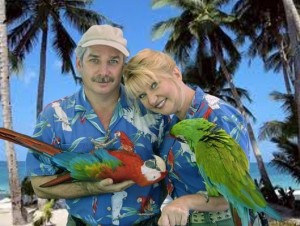 Imagine an upside down world in which humans had the brains of birds (we know what you’re thinking; just play along) and birds the brains of humans, and in that world the birds could train the humans to fly, catch worms and say “Polly wanna cracker.” In short, teach them to do many of the things birds can do all for the enjoyment of the birds. It would make for fascinating viewing and undoubtedly draw numerous feathered spectators to watch – provided the birds had had the foresight to turn it into an entertainment spectacle.

That’s kind of what Squawk! the Show is like here in our right-side up world, where the birds – parrots, to be specific – perform amazing feats once thought to be the purview of humans. Fortunately for us their trainers, Debbie and Mark Obarka, did have the foresight to turn it into an entertainment spectacle. We are delighted to present it to you this Saturday night, April 5, and each and every Saturday night in April. Showtime is 6 p.m. in the Island Courtyard.

If you didn’t think it was possible for birds to paint, play cards, solve math problems and read minds – yes, read minds! – this quickly moving hour-long show will amaze, amuse and remove all your preconceived notions about what our fine feathered friends are capable of. (That is, if you had any preconceived notions. Who knew?)

Debbie, Mark and their amazing pet parrots have worked all over the country and been seen by more than 2 million people at their live performances.  They have appeared on The Late Show with David Letterman, Animal Planet’s PetStar and America’s Got Talent.

Don’t miss Squawk! the Show during its limited engagement at Tahiti Village. In addition to their Saturday night shows, the parrots will also perform at our annual Easter egg hunt on Saturday, April 19, from 9-11 a.m. at the Island Courtyard.