Unique facts you may not know about Las Vegas

Back when dad was a blackjack dealer, years ago in the heyday of the Frank Rosenthal-Tony Spilotro Stardust, people, in all innocence, would ask him where he lived when he wasn’t pitching cards.

“Los Angeles,” he would reply. “They fly us in here to work.”

The idea that Las Vegas existed outside the narrow purview of the casino was a concept not easily reconciled by the stimulus-addled brains of mesmerized tourists.

They could barely conceive of a place like this to begin with, let alone accept the paradox of a showgirl prancing au naturel before strangers at the Folies Bergere, then seeing her kids off to school the next morning.

Taken in the context of the time, it is understandable. Las Vegas existed in the minds of visitors solely as an adult Disneyland – a place where everyone magically popped in and out.

Which brings us, in this Unique Facts about Las Vegas article, to Unique Fact Number One:

While the myth of a city existing outside the Strip persisted for years, Las Vegas has always been a boomtown, only no one knew it. Residents would always proclaim the normalcy of life here, only no one heard. It wasn’t until the early `90s, with the advent of family-friendly resorts and the mass migration of hotel workers, that the perception began to change.

It was impossible not to notice that Las Vegas was becoming the nation’s fastest growing city, with new neighborhoods sprouting up and sprawling in every direction to house the 6,000 people a month flocking here to work in the megaresorts opening up and down the Strip.

Now, more than 20 years since the start of the last and greatest boom, telling people you live in Las Vegas is like saying you live in Ohio. Las Vegas has everything everywhere does, and casinos have popped up like wild mushrooms all over the country, an occurrence that served to dull what was once our primary debauched distinction.

So the unique fact anymore may not be that a city exists outside the Strip; it’s that everyone now accepts the reality.

Other Unique Facts about Las Vegas You May Not Have Known

• According to estimates, it would take 288 years for one person to spend one night in every hotel room in Las Vegas, of which there are approximately 150,000 including Tahiti Village!

• According to astronomers, the Las Vegas Strip is the brightest place on Earth when viewed from outer space.

• The largest sum won on Las Vegas slots was at the Excalibur. After putting in $100, a 25-year-old software engineer won $39 million, beating the odds at the time for 1 in 16.7 million.

• Shrimp consumption in Las Vegas is over 60,000 pounds per day, higher than the rest of the nation combined.

• There are over 300 weddings per day in Las Vegas, making it the top wedding destination in the United States.

• After staying longer than his initial reservation (in which he had booked the inn’s entire top two floors), Howard Hughes was asked to leave the now imploded Desert Inn by the owner. Instead, he purchased the resort for around $13 million. Wynn and Encore now sit on the property.

• There’s about one operating slot machine for every eight Las Vegas residents.

• According to estimates, more than 1,000 people are living beneath Las Vegas in underground tunnels.

• Fifteen of the 25 largest hotels in the world are located in Las Vegas, begging the question: Does underground living come with room service? 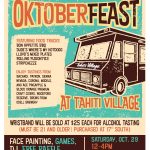 OktoberFeast is coming to Tahiti Village! You should be too!

Shop `til You Drop in Las Vegas!