The recent arrival of two new shuttles means you’ll be riding in extra comfort on your next visit. Each new bus is compliant with federal disability laws, seats 38 passengers (32 when modified for wheelchairs) and has a rooftop-mounted air conditioning system that is more than a match for the Las Vegas heat.

Unlike the side-mounted air conditioning system on the older buses, the rooftop system does not pull in ground heat from the asphalt, which can reach 200 degrees. Instead, it draws in air from the top.

“When running at optimal capacity,” Robert explained, “it cools the bus much faster than the side-mounted AC system.”

The system is comprised of three fan condensers for a total of nine fans and three AC compressors.

“It’s a much more heavy duty unit,” he said.

At 36 feet, the new shuttles are anywhere from two to four feet longer than their predecessors, contain more seats and have a backup camera with proximity censors.

The arrival of a third new bus, expected in June, will raise to five the number of shuttles in our fleet that are compliant with the Americans with Disabilities Act (ADA). The expected acquisition of another ADA shuttle by the end of the year means six of our seven buses will be compliant. “The goal is to have all of our buses be ADA compliant,” Robert said.

New to all our shuttles are fancy route cards designed by an actual graphic artist. They are placed in sign holders in the side window and denote the route number and destination, such as Red Rock Canyon or the Fremont Street Experience.

Now you’ll never board one of our buses thinking you’re going to the grocery store and wind up at a casino. 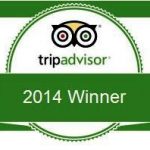 Certified Excellent: TripAdvisor Honors Us With A Certificate Of Excellence For The Third Straight Year

Lynn Mitchell named Chairman of the Board