Two of the fastest straight line vehicles on Planet Earth and their adrenaline-fueled drivers will be at Tahiti Village Resort & Spa, Las Vegas’ favorite tropical resort paradise, for a meet and greet on Oct. 30. NHRA drivers Terry McMillen and Chad Green will chat with fans, sign autographs and pose for photos from 11 a.m. to 1 p.m.

Terry has competed on the NHRA circuit since 2007. He drives an 8,000-horsepower Top Fuel Dragster capable of reaching 330 miles per hour. He won the prestigious U.S. Nationals for the first time in 2018, and earned his first career win, in Las Vegas, in 2017.

Chad is a NHRA Pro Mod driver. His 3200-horsepower vehicle can reach speeds of more than 250 miles per hour. Chad made his NHRA debut in 2018, qualifying for all 12 national events and finishing fifth in the championship points to cap an impressive rookie campaign.

The event is free and open to the public. It will be held at the Tahiti Village front entrance beneath the porte cochere. Tahiti Village is located at 7200 Las Vegas Blvd. South and Warm Springs Road.

Family friendly Tahiti Village in Las Vegas is proud to be the hotel partner of Terry McMillen and Chad Green. We wish them the best of luck at the NHRA Las Vegas event. We encourage Tahiti Village guests and Las Vegas residents to stop by for the meet and greet. This will be Chad’s first visit to the property, and we have been hosting meet and greets with Terry on his twice yearly visits to Las Vegas since 2013.

He’s even been known to let fans sit in his Amalie Oil dragster, the Xtermigator! 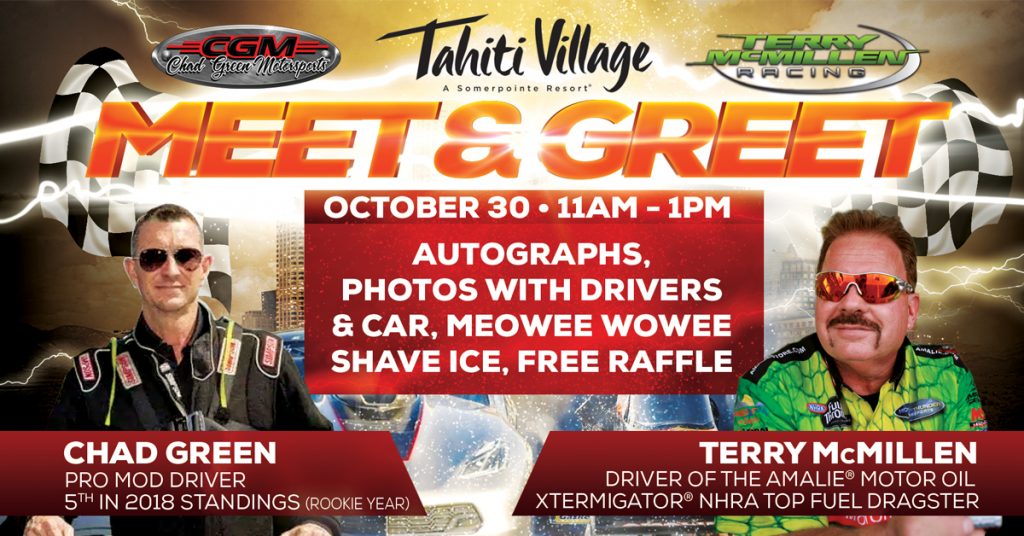