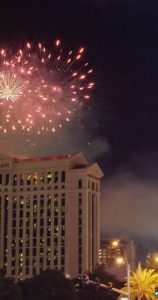 Mike Rounds’ tenure as general manager of Tahiti Village encompasses virtually the entire existence of the resort. He arrived in August 2006, six months after the grand opening, and has played a vital role in its greatest growth.

When he leaves tonight he’ll take the same route home he always has, out his sixth floor office, down the Tower 5 elevator, and up to the fifth floor of the parking garage where a jet black Acura in space 566 awaits his return.

The difference is, on Monday morning, he won’t follow the same route back. Today is Mike’s last at Tahiti Village, to the detriment of the many friends he has made these past 11 years – coworkers, owners and visitors who will miss his engaging personality, disarming demeanor, and amusing analogies that cannot be shared in a family blog. Just know that his face turns red with laughter at their telling, like mercury racing up a thermometer.

“I’ve really enjoyed being a part of a great team, and helping Tahiti Village become what it is today,” he said on July 31, the first day of his last week on the job. “What I’ve been able to accomplish is because I had the support of everyone in the company.”

Walking the property with him in search of a suitable portrait location was to witness Mike in microcosm: Warmly greeting guests, picking up discarded trash, and presenting an image of pure professionalism that has done our resort proud.

“I know this may sound cheesy, but I when I walk through the lobby, around the pool area, and down the hallways, I get a great deal of personal satisfaction knowing that we are providing a great family vacation experience for people,” Mike said. “We’re bringing people closer together. That’s what I will miss the most.”

His acceptance of the general manager position at another Las Vegas resort effectively brings to a close his career at Soleil Management, which began in 2001 as resort manager for Club de Soleil. He remained there for two years before taking the general manager’s job at Tahiti Resort in 2003.

We wish him all the best in his new job. It won’t be the same around Tahiti Village without him.