Shop `til You Drop in Las Vegas!

Lots of you (like 42 million or so) visit Las Vegas every year. You come for different reasons. For some of you, it’s the thrill of the chase – the pursuit of the big score more than the score itself that activates the pleasure center in your brain and keeps you coming back time and again.

For others of you, it’s the opportunity to fine dine in restaurants helmed by world renowned chefs (like Jason Diaz’s 17˚ South Booze & Bites at Tahiti Village!). Still more of you savor the variety of entertainment options on offer, from popular headliner acts to traditional Cirque-style production shows to ubiquitous comedy clubs.

Then there are those of you for whom a visit to Vegas means one thing and one thing only: shopping! Get this: We know a guy who has a wife who has a sister who, on her yearly trips to our radiant city, buys two extra suitcases while she’s here just to hold all the stuff she’s going to bring back. One of those suitcases, we’re told, is reserved for shoes.

We imagine such single-minded devotion to wardrobe wrangling isn’t analogous to this one individual. Judging by the number of shopping outlets that enable this behavior, we must deduce it is epidemic! Therefore, this article on Las Vegas retail outlets isn’t for the initiated; they already know and have patronized these alluring establishments many times over.

It is for you, the person who enjoys a good shop on vacation but doesn’t know where to go in Las Vegas.

For your reading convenience, we have broken down the enviable array of choices into three categories based on their dominant demographic: Mostly Visitors, Mostly Locals, Vegans & Visitors Combo Platter. (That’s Vay-gans as in Las Vegans, not veeeeegans as in people who abstain from animal products.)

As Strip-based shops (or shoppes, for the two that insist on intentional old-fashioned quaintness), these typically adhere thematically to their host hotels and create a uniquely Vegas shopping experience where entertainment is built into the buying. This is exemplified most dramatically at the Venetian’s Grand Canal Shoppes, which features its own gondoliers!

The Shops at Crystals (Aria)

The Grand Canal Shoppes (The Venetian)

If you want to escape the magnetic hold of the Strip and mix with Vegas residents on their home turf (and in their food courts), the following will give you a true locals’ experience.

Opening in 1968, the Boulevard is Las Vegas’ oldest mall. Centrally located on Maryland Parkway, the Boulevard has undergone numerous recent changes. Longtime anchor stores Dillard’s, Macy’s and JCPenney have all left and been replaced by nontraditional tenants new management hopes will attract a younger clientele.

Residents of the growing near northwest area of Las Vegas received a mall of their own when the Meadows opened in 1978. The double decker mall still features original anchor tenants Sears, JCPenney, Dillard’s and Macy’s in addition to the changing cast of storefronts.

Opening in 1996, the Galleria at Sunset finally gave suburban Henderson residents a mall to call their own. Like the others mentioned above, it offers standard mall fare but will more than adequately satisfy your shopping jones if you’re in the area.

The Strip’s first mall was a sensation when it opened in 1981 and still retains its upscale cred. Bringing high-end anchor tenants and chic specialty shops to Las Vegas for the first time, the Fashion Show attracted a mix of locals and visitors to its mid-Strip location. Thirty-seven years later, it still does.

Similarly named but geographically opposed, this premium pair offers convenient shopping options for those staying downtown (north) and those visiting Tahiti Village or any of the nearby resorts (south). If you’re here in winter, be advised: Las Vegas North’s walking spaces are outdoors.

With the exception of Town Square Las Vegas, which is centrally located on Las Vegas Boulevard a mile from Tahiti Village, the following are far-flung from the Strip but well worth the drive.

Unique facts you may not know about Las Vegas 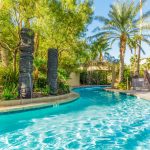