How to bet the Big Game in Las Vegas

The biggest sporting event of the year is upon us.

For fans of the two teams playing for the championship of professional football on Feb. 2, the Big Game is a culmination of a season’s or lifetime’s worth of devotion. Hopes and dreams of vicarious glory are fulfilled or dashed depending on which side of the scoreboard your rooting interest falls.

For everyone else, it’s all about the money.

The Big Game is the most heavily wagered sporting contest in the nation if not the world; people come to Las Vegas from all over to lay down their cash and hope for a bountiful return on investment. While bets on the point spread, money line and over/under commonly cross the sportsbook window, over the years prop bets have gained in popularity among the (especially low stakes) wagering public.

The appeal of prop bets lies in their ubiquity and quirky character. Bettors can wager on hundreds of propositions ranging from the game-centric (which team or player will score first?) to the exotic (will the national anthem take more or less than two minutes?). Please click here to see a comprehensive list of prop bets for this year’s Big Game.

Will the coin toss be heads or tails?

Get your betting day off to a great start with a proposition that gives you a 50-50 chance of success.
Yes (Even)
No (Even)

Will the singer of the national anthem forget or omit a word?

In other words, will 28-year-old Demi Lovato have a senior moment in front 80,000 people at the game and millions around the world watching on television and streaming devices?
Yes (+300)
No (-500)

Jersey number of the first player to score a touchdown.

The two numerals before the decimal point in the 31.5 over-under figure below indicate a player number. Taking the over means you’re betting that a player wearing a jersey number higher than 31 scores the first touchdown. Taking the under means you’re betting that a player wearing jersey number 31 or less than 31 scores the first touchdown. The arbitrarily chosen figure comes at a steep price: The San Francisco player who wears No. 31, running back Raheem Mostert, is a touchdown machine who crossed the goal line four times in his last game.
Over 31.5 (+140)
Under 31.5 (-400)

Will both teams score in all four quarters?

A yes means you think the 49ers and Chiefs will score a touchdown, field goal or safety in every quarter. Even with offenses as explosive as Kansas City and San Francisco’s, this is a lot to ask.
Yes (+140)
No (-270)

Will there be overtime?

Only one previous Big Game has extended beyond four quarters.  That was in 2017, when Tom Brady famously led the Patriots back from a 28-3 third quarter deficit against the Falcons, tied the game in regulation, and won it in overtime.
Yes (+350)
No (-375)

Will San Francisco coach Kyle Shanahan blow another 28-3 lead in the third quarter? Shanahan was offensive coordinator of the Falcons in their unprecedented Big Game meltdown against the Patriots. His play calling was widely criticized and largely blamed for Atlanta’s historic collapse.
(Yes +50)
(No -2000)

Will a player injure himself in celebration and be unable to continue?

This would be a first in Big Game history, which explains the low odds. Injury owing to excessive celebration, though rare, isn’t unheard of. In a regular season game in 2001, an excitable Arizona kicker injured himself when, after converting a field goal, he jumped for joy and blew out his knee on the landing.
Yes (-400)
No (+120)

Will the referee tossing the coin to determine who gets the ball first mistakenly call tails if it lands heads or vice versa?

This actually happened during a regular season Thanksgiving Day game a number of years ago. What will it be next, reviewing the coin toss?
Yes (+500)
No (-400)

If you’re planning to spend the Big Game weekend in Las Vegas, book a spacious guest room at Tahiti Village Resort & Spa. Featuring a sand-entry beach pool, lazy river, condo-style accommodations, two 24-hour hot tubs, an onsite restaurant and spa, and shuttle service to the Strip, Tahiti Village on the south end of the world famous Las Vegas Strip has everything you need to relax, unwind and get away from it all. In-room amenities in larger one-bedroom and two-bedroom units include a fully stocked kitchen, washer-dryer, jetted tub, steam shower and private balcony for your convenience and enjoyment.

Book your Big Game weekend visit to Las Vegas and Tahiti Village Resort today. We’re an easy commute to dozens of Las Vegas Strip sportsbooks including the Tropicana and Mirage, where our free Strip shuttle stops at the top and bottom of each hour. Please remember: only bet what you can afford to win! 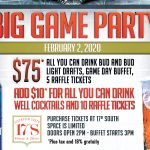