The much anticipated 17° South Booze & Bites earned rave reviews among owners who attended a private party at our new bar and bistro ahead of today’s grand opening.

The Boves and the Nieters

“I think this is over the top fantastic,” said Carolyn Bove, of New York, visiting with her husband George and friends Vicki and William Nieter. “It’s absolutely beautiful – open and airy with lots of seating and TVs. The space generates a really great feel.”

“I love that it opens up to the outside,” Vicki added. “I don’t feel crowded or pushed in.”

Sharon and Bobby Bedford, owners from Los Angeles, grabbed a prime spot on the patio overlooking the pool. They were joined outside by family members who shared their table and selections from a complimentary buffet beneath the palapa-covered awning.

“I like the atmosphere,” Bobby remarked, a golden beverage awaiting his attention.

“I think it’s wonderful,” Kathy said. “The location is so much better. It’s a great spot.”

“It’s a really nice addition to the resort,” Dennis said. “The location, the atmosphere – everything’s great.”

Owners enjoyed a selection of tempting taste treats that included grilled cheese and tomato sliders, crab cakes, meatballs and shrimp cucumber cups from the 17° South kitchen. The Boves and the Nietors enjoyed them so much they changed their dinner plans.

“We were going to see the Love show and were planning to get there early to gamble and get something to eat at the casino. Now we’ll just gamble,” Carolyn said, adding that the macaroni and cheese “was awesome.”

“We’ll definitely be back.”

We hope to see you soon! 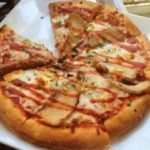