Suffer no more! Football is back and so are the great food and drink specials at 17° South Booze & Bites! 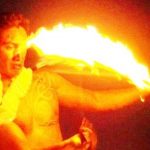