Terry McMillen, our favorite Top Fuel drag racer, will make his second Tahiti Village appearance of 2013 on Wednesday, Oct. 23 as he prepares to qualify for the NHRA Toyota Nationals at Las Vegas Motor Speedway. Terry will not only race his pink gator-themed Amalie Oil dragster again, but show it off right here at Tahiti Village in support of Breast Cancer Awareness Month.

Terry and his pink dragster last fall at Tahiti Village.

Terry and his dragster will make a special appearance from 11 a.m. to 1 p.m. in front of the main lobby building. You can meet Terry, sit in his 8,000-horsepower dragster and enter to win tickets to the NHRA Toyota Nationals. With a donation to the She4Life foundation you will also have the opportunity to put the name of a friend or loved one who has fought or is fighting cancer on Terry’s dragster. She4Life is dedicated to enhancing the quality of life for breast cancer patients and their families through unique programs and partnerships.

Tahiti Village rooms and suites are still  available for the NHRA Toyota Nationals weekend. For booking our special Terry McMillen package rate, click here and use the code TERRY13.

“This is always a special time of year for our team,” Terry said. “Tahiti Village is helping make it even better by allowing us to use their beautiful venue as a backdrop to help She4Life.”

As we did at his last appearance in April, we are staging an electric slot car competition featuring 1:24 scale versions of Terry’s dragster. Contestants will compete for prizes on a Top Fuel Dragster Pro Racing Dragstrip that includes a 13-foot track and an LED Christmas Tree, electronic starting gate, electronic finish line and a red foul light. It’s as close as you’ll ever get to the real thing!

Terry is also bringing his own Eliminator game to determine the Fastest Thumb in the West. Eliminator contestants holding push button pendant switches compete against one another or individually on a Pro Tree timing system that simulates a drag strip Christmas tree. The lights descend from yellow to amber to green, with the first thumb off the depressed red fire button declared the winner.

Our activities staff will also be on hand to serve free popcorn and lemonade. We are proud to be the home resort of Terry and his crew when they make their biannual visits to Las Vegas.

Professional qualifying for the NHRA Toyota Nationals begins Friday, October 25, with racing on Saturday and Sunday. Please click on the Las Vegas Motor Speedway link below for ticket information. 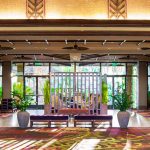 Celebrate the season with us Saturday at Oktoberfeast!