This final blog post of the year is to remind you of our annual New Year’s Eve party from 10 p.m. to 2 a.m. at Skyview 510, the 10th floor lounge in Tower Five. For this year’s bash we’re presenting a new kind of party – a masquerade party where masks are optional. Once word gets around about this new masks-optional masquerade party, we think it will catch on like a Justin Bieber haircut. We will provide masks, or you can bring your own. Or simply wear the mask you were born with. Like we said, it’s that kind of party. Please click here for all the details, including ticket information. If you’re looking for a traditional Vegas New Year’s Eve experience with all the bells and whistles, click here for a comprehensive list of Vegas events as we bring in 2013. Please be aware that the Las Vegas Strip will be closed to traffic from Sahara to Tropicana Avenues from approximately 4 p.m. New Year’s Eve until approximately 3 a.m. New Year’s Day. However and wherever you choose to celebrate, we wish you a very happy and safe new year. 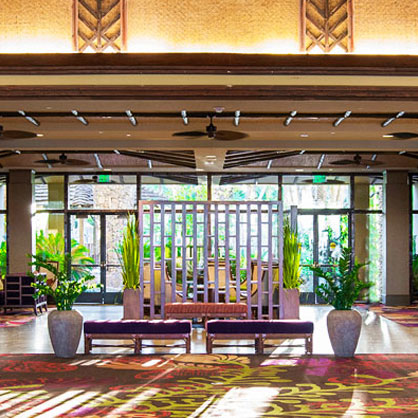 Bid farewell to 2012 by joining us for our fifth annual New Year’s Eve party 10 p.m. to 2 a.m. at Skyview 510, on the 10th floor of Tower 5. Skyview 510 offers an unobstructed view of the Strip and the spectacular midnight fireworks display. This year’s event is a masquerade party. You can bring your own mask or take one of ours. Of course if you prefer to show the beautiful face you were born with, you’re not obligated to cover it. Masks are optional.

We wish you a wonderful holiday season and Happy New Year. Make it even better by spending it with us!

Gary Spivey, who you may have heard via his guest appearances with Chet Buchanan and the Morning Zoo on 98.5 FM in Las Vegas, will bring his uncanny psychic ability to Tahiti Village this Saturday, Nov. 3. Gary’s Enlightenment Seminar draws huge crowds wherever he appears. Gary is renowned for predicting future catastrophic events, so much so that he has been called a “modern day Nostradamus.”

If you’re staying at Tahiti Village this Saturday, it’s your lucky day. Over the course of his seven-hour seminar Gary will show you how to manifest your dreams and desires, heal yourself and others of illness, and see, hear and talk to God. Visit Gary’s website for more information, including ticket prices (you won’t believe the generous internet discount) and seminar time.

Owners and guests had the rare opportunity to see in person – and in some cases sit inside – Terry McMillen’s 8,000-horsepower dragster during his recent visit to Tahiti Village. Terry hosted a three-hour meet and greet with visitors on property Wednesday, prior to his performance this weekend in the Full-Throttle Drag Racing Series at the 12th annual Big O Tires NHRA Nationals at the Las Vegas Motor Speedway. He signed autographs, answered questions and posed for pictures near the entrance to the main lobby building, where he displayed his Top Fuel dragster. Several took Terry up on his invitation to sit inside the tight cockpit, which, as one 240-pound gentleman discovered, was a lot easier to get into than out of. “I hope we don’t have to cut you out of there,” Terry remarked. The event was live online through a Google Hangout and drew a considerable crowd of curious onlookers at the resort over its three hours.

We are the official resort of Terry and his crew during their biannual trips to the Las Vegas Motor Speedway for NHRA Full-Throttle Drag Racing events in the spring and fall. We look forward to hosting them again in 2013. For more information on Terry, please visit his website at terrymcmillen.com.  It offers comprehensive information on Terry’s background, his racing organization (Hoosier Thunder Motorsports) and an extensive photo gallery.

Terry’s dragster is currently wrapped in pink, and he and his crew wear pink race jerseys to bring awareness to breast cancer. They will auction the jerseys on Terry’s website starting Nov. 1, with the proceeds benefitting S.H.E. 4Life, a nonprofit organization that provides financial assistance for women with breast cancer.  To see the S.H.E. 4Life YouTube video, please click here.

When the NHRA Full-Throttle Drag Racing series pays its biannual visit to Las Vegas, you can count on two things: Terry McMillen sending his 8,000-horsepower dragster down the track at more than 300 miles per hour and staying right here at Tahiti Village when he’s done.

As the official resort of Terry and his crew, we’ll be hosting a meet and greet with the top fuel drag racer from 10 a.m. to 1 p.m. this Wednesday, Oct. 24. Terry will sign autographs, and you’ll have the opportunity to see the dragster he’ll race at the 12th annual Big O Tires NHRA Nationals Oct. 25-28 at the Las Vegas Motor Speedway.

If you can’t make it to Tahiti Village in person, don’t worry. We are having a Google Hangout so you can watch the event online. We will tweet a link on our Twitter page as soon as the Hangout starts. Whether you attend the event or watch it online, you will have the opportunity to participate in separate drawings for four free race tickets and a two-night stay at Tahiti Village.

If you miss his appearance here this year, Terry will be back twice in 2013, in early April for the NHRA Winter Nationals and once again in October.

Those of you watching online and who want to enter one or both of the drawings should send us your name in an email to [email protected]. We will announce a winner the same day.

You are invited to enjoy hors d’oeuvres and live Hawaiian music, as well as mingle with and purchase art from the artists themselves. There will be a drawing for a free two-night stay in a Bora Bora. Admission is free. Proceeds from all art sold will directly benefit Opportunity Village for persons with disabilities. The event will take place in the main lobby and outdoor gazebo area.

Opportunity Village’s Open Studio/Fine Arts Program encourages artists with intellectual and related disabilities to discover their talents and refine their techniques through an individualized artistic process. 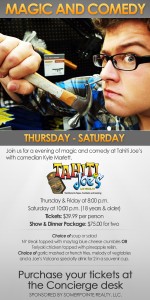 Most people take ordinary household items, a screwdriver, for instance, and use them only for their intended purpose. Kyle Marlett jams it up his nose. That’s how you get on Leno – and land a weekend gig at Tahiti Joe’s, where he makes his anticipated debut Oct. 11.

“I’m extremely excited to be coming to Tahiti Village,” he said. “The resort is so nice, and the staff is great. It’s so great as a performer to be at a venue where everyone is so supportive of me being there.”

The 21-year-old comedian and self-described “magic nerd” is a sleight-of-hand specialist who may be slightly out of his mind. You can judge for yourself  Thursday, Friday and Saturday nights, when Kyle presents an act that is part traditional magic, part carnival sideshow and completely amazing.

You won’t believe what he does with razor blades and dental floss, to say nothing of the aforementioned screwdriver. Kyle warns not to try these tricks at home. We would hasten to add not to try them anywhere.  A video of the screwdriver stunt has received a few thousand hits on YouTube and led to an appearance on The Tonight Show with Jay Leno on Sept. 16, 2011.

“Being on Leno was the greatest thing to happen to my career,” he said. “I’m the youngest magician to ever appear on The Tonight Show, and to be able to perform for Jay in front of countless people watching from home was amazing.”

Kyle’s show is much more than a succession of shock stunts, which comprise just a portion of his act. His sleight of hand artistry offers new twists on old favorites, and he conjures Kreskin with a series of astounding mentalist demonstrations.

We are happy to welcome Kyle to Tahiti Joe’s – and anxious to see if he can make our bottomless cocktails disappear.

Tahiti Village is bringing in 2012 with “An Eve in Paradise.” Join us Dec. 31 in our 10th floor Owners Lounge from 10:30 p.m. to 2:30 a.m. for what we’re guessing will be the only New Year’s Eve bash in Las Vegas featuring Grand Marnier chocolate strawberries. The party will culminate with a spectacular Strip fireworks display you can view from our spacious balcony.

The party also includes an open bar, live entertainment and dancing, a chilled seafood appetizer bar, fresh fruit, assorted cheeses, hats and party favors, and a complimentary New Year’s Eve photo souvenir. Last year’s event drew 82 partygoers, and we’re expecting even more this year. This is the kind of extravaganza so many New Year’s parties aspire to but utterly fail to achieve.

“We are looking forward to counting down 2011 and getting 2012 started off on the right foot,” said Stacy Pickett, banquet and catering manager for Tahiti Joe’s, which is providing the food and beverages. “This is going to be our best New Year’s Eve party yet.”

Tickets are $115 plus tax and available at the Tahiti Village front desk or concierge and through our catering department at 702-440-6945. Must be 21 to attend.

Nov. 16,
2011 – 11-11-11 marked the most popular wedding day of the year at Tahiti Village, with twenty-five couples saying “I do” at locations throughout the resort. Brides and grooms reserved our Beach, Waterfall and Gazebo for their ceremonies. You may think Valentine’s Day would have set the record for weddings in a single day this year, but it didn’t come close to Nov. 11.  “Believe it or not, Valentine’s was not a busy wedding day compared to 11-11-11,” said Stacy Pickett, Tahiti Village banquet and catering manager. “And so far we do not have any weddings booked for next Valentine’s Day.”  She adds the most popular wedding dates next year  are 10-11-12 and 12-12-12. The single-day record of 27 weddings was set on 9-10-11.

Weddings went off virtually every half hour between 1 and 10 p.m. on 11-11-11.  “We have 18 people working in teams out here today,” said Ann Parsons of Vegas Weddings, which coordinated the revolving door of sequined dresses and black tuxedos. The volume of weddings on 11-11-11provides a timely reminder that we can host your next celebration with style and elegance. “One call can do it all,” Stacy says. “We can arrange everything from the food and drinks to the band and the flowers.” Whether it’s a wedding, reception, reunion, meeting, birthday or anniversary, Tahiti Village can provide complete banquet and catering services for groups from 15 to 300. To arrange your special party or event please contact our banquet department at (702) 440-6945 or [email protected]tahitivillage.com.