Watch Seth Grabel try to pull one over on Penn & Teller this Monday night on Fool Us!

Back in February, a month before his big TV taping for Penn & Teller’s Fool Us magic competition show, spectacular Tahiti Village magician Seth Grabel proclaimed: “It’s going to be one of the craziest things I’ve ever done.”

Immediately and without prompting, he proceeded to describe in graphic detail what can only be called a date with digestion, then made us promise not to reveal the gory specifics. (We promise, Seth!)

Fool Us brings together magicians to perform tricks in front of Penn & Teller. If the famous duo cannot determine how a trick was done, the magician who performed it will get the once-in-a-lifetime opportunity to perform as their opening act at the Rio Hotel & Casino right here in Las Vegas.

Without revealing whether he fooled Penn & Teller or not, Seth said “I did exactly what I planned to do, which is perform the biggest stun ever seen on the show. We made magic happen, and I accomplished my goal of pulling off a stunt I have been thinking about for years.”

The episode, filmed in March, will air Monday, June 23, from 8-9 p.m. on the CW network (KVCW Channel 33 in Las Vegas) right after Seth’s regularly scheduled Monday night performance from 7-8 p.m. in our Tahiti Village Kahiko Room. Don’t miss it! 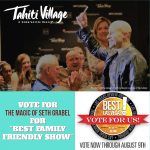 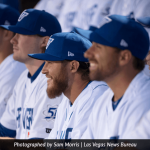