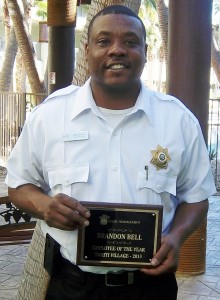 It didn’t take Brandon Bell long to distinguish himself in the eyes of our safety and security director Richard Ingling. Rich hired Brandon as a security officer at Tahiti Village in October 2012, and less than a year later promoted him to lead good guy. Brandon’s ascension did nothing to diminish his work ethic. In fact, he took it to another level – a level where Employees of the Year are made.

Rich nominated him for the honor for myriad reasons, not the least of which was Brandon’s love for his job and positive daily interactions when he is making rounds or assisting guests.

“Brandon has the ability to inspire not only his fellow security officers, but also members of other departments through his attention to detail and excellent customer service,” Rich said.

He also cites Brandon’s willingness to volunteer for assignments and dedication to upholding departmental policies as primary factors in his nomination. Congratulations, Brandon! We feel safer already.